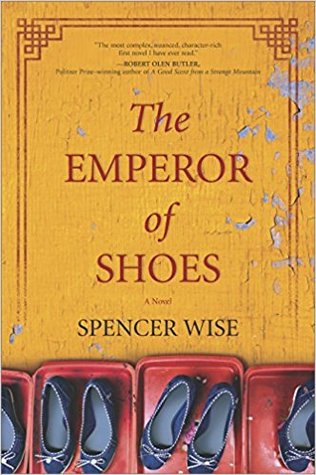 Life always seems to be in a state of flux. As we grow, we develop relationships, some of them tenuous which have a pull and tug connection between our selves and our world in which we live.

Alex Cohen is a young Jewish man living in Southern China. He and his father own a shoe factory and have a relationship that can be considered at times contentious. Alex’s dad is the boss. His word is law and though at times his words to Alex are funny, they often hurt. Alex is in a relationship with a Chinese revolutionary, a young girl who works in the factory. She and others are looking to change China. They want a more democratic form of leadership and as Alex assumes and becomes the head of the company, he sees how the workers are being exploited.

Alex loves his father and yet when he sees the climate the workers are forced to be in, and their plight, it sets him on a collision course against the father who has always been his rock. Alex runs up against the idealism of what he wants to see happening and the love of a father and the heritage he carries. He also finds himself in a dangerous situation with the powers that be.

Alex’s father is ambitious, wanting success to be theirs, always striving for more, often disregarding how one does acquire that more. China is portrayed, twenty five years after Tiananmen Square, as being a place ripe for democracy yet controlled by a few who would use any means to keep their position. It is a place ripe for change and as Alex himself fells change coming, he witnesses not only a country, a people wanting to so embrace human rights and needs, but he himself grabbing onto change within the person he strives to be.

Beautifully written, this story unfolds among a world that is changing too fast for some. Can Alex find that freedom he longs for, freedom from his father, freedom from heritage, and freedom that will not shatter everything? Can he save the relationship he has had with his father and with the young Chinese revolutionary, Ivy? “Relationships are like glass. Sometimes it’s better to leave them broken than try to hurt yourself putting it back together.” Can China also find their way in recognizing the human in every person who lives and works within their massive country?

Thank you to Spencer Wise, Hanover Publishing, and Edelweiss for an advanced copy of this book. It was quite an interesting look into a world where freedom is not really free. “You learn more about someone at the end of a relationship than at the beginning.” Spencer Wise’s family has been in the shoemaking business for five generations. In addition to working at a shoe factory in South China, Wise has professional experience ranging from gutting chickens and selling ginsu knives to editorial work at Sports Illustrated and Time Out New York. His writing has appeared in Narrative magazine, Hayden’s Ferry Review, The Florida Review, and New Ohio Review. He is the recipient of the 2017 Gulf Coast Prize in nonfiction and a Vermont Studio Center fellowship. He has a PhD from Florida State University in creative writing and teaches at Augusta University.